Li and his legend

The Li Han-hsiang retrospective rolls on here at the Hong Kong International Film Fest. For my initial blog on the subject, along with relevant links, go here [1].

Li is chiefly known for his costume pictures, though he reveals a talent for more intimate fare, as seen in The Winter (1969), which I commented on earlier. His early HK films, like Lady in Distress (1957) and A Mellow Spring (1957), are fairly typical Mandarin-language melodramas, with comparatively high production values and centering on suffering heroines (played in both of these by Linda Lin Dai). The first is a rural romance, with some attractive landscape locations and night-for-night shooting. A Mellow Spring, an instance of the “tenement film” characteristic of 1940s-1950s Hong Kong cinema, takes place over a single day and moves among several families in an apartment bulding.

Li’s direction here is simple and traditional. He uses fairly distant staging, presenting shot/ reverse-shot breakdown of dialogues and camera movements that adjust to the characters’ movements. A moment of tension will be underscored by rapid cutting. There are occasional depth shots, but nothing that would be considered unusual for the 1950s in other national cinemas.

Perhaps the most unusual aspect to western eyes is a habit that Li relies on throughout his career. After a cut, a character may pop into the frame from left, right, or below, usually in close-up. Directors of martial arts films use this tactic in the 1960s and thereafter, but I was surprised to see it in the context of straight drama. It will recur in the Taiwanese films Li directed or supervised. I can’t say if it’s original with him or if he and his subordinate directors took it from another source, but it certainly tends to accentuate the reaction shot. In other directors’ action pictures these abrupt frame entrances becomes part of a captivating overall rhythm of cutting and figure movement.

In 1963 Li moved to Taiwan and founded the Grand studio. As he attests in the archive’s indispensable book [2], he was a poor businessman and Grand folded in a few years. His most acclaimed achievement there was Beauty of Beauties (1965), a spectacular historical saga. I’d seen it before, but the archive screening offered an opportunity to look more closely. Unfortunately, the original two-part release is unavailable, so a 155-minute version was shown.

It’s certainly an awesome achievement. Two or three exterior sets are enormous and crowded with soldiers, chariots, and masses of commoners. Clearly Beauty of Beauties was an effort to rival the behemoth pageants of Hollywood. The central plot, however, isn’t very visible in the shorter version. King Fu Chai has conquered the kingdom of Yueh, so Yueh’s king sends Hsih Shi, a beautiful village girl, to Fu’s court to seduce him. She succeeds in weakening the influence of his counselors, and after seventeen years (!) Yueh’s king gains the strength to rebel against the oppressors. The problem is that in making the short release version, the editors played up the scenes of crowd spectacle and took out most of the palace intrigue. The result is choppy, with some scenes interrupted midway and little effort to trace Hsih Shi’s growing sway over Fu. 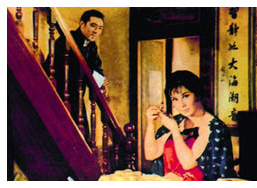 [3]More satisfying, in a lowbrow way, were Grand items like Storm over the Yangtse River (1971), a thriller in which Chinese guerrillas fight the Japanese occupation in the 1930s. Lots of spy-vs.-spy trailing, double-dealing, and bluffing are at the center here. The most Wellesian of the Li films I saw, this is full of steep angles and shock cuts. A good visual idea was the towering inn set, which allows Li to show action on different staircase landings simultaneously. Clearly he could direct unpretentious entertainment when he wanted to.

Li and his league

Just as interesting as Li’s own Taiwanese pictures are those he supervised. Of the ones I saw, three were directed by Yeung So, and they offered instructive early examples of the contemporary melodrama called chiungyao films.

Chiung Yiao (Qiong Yao) was a popular writer of romance novels, and she gave her name to an entire genre of fiction and film [4]. Probably the most famous chiungyao movie is Outside the Window (1973), starring Brigitte Lin Ching-hsia and centering on the forbidden love between a teacher and his student. Other chiungyao films I’ve seen center on cross-class romances or the miseries of the well-to-do. The rich young people listen to rock and roll and drive Vespas, and they live in modernistic houses with well-stocked bars and doily-covered armchairs. Chiung Yao’s work helped Taiwanese cinema attracted a new generation of viewers while showcasing a self-consciously modern Taipei culture. 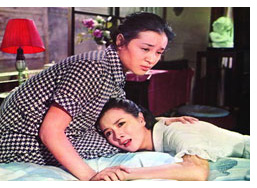 [5]Yeung So’s Many Enchanting Nights (1966), for Grand, was an early Chiung Yao adaptation. At first it seems to be about a high-school girl from a struggling family who falls in love with a rich man’s nephew. Gradually the narration shifts toward her parents and their domestic tensions, which revolve around the wife’s youthful love affair with the wealthy man. A long flashback fills us in on the backstory, and the weight of the film falls on the mother, who suffers not only abandonment by her lover (through a misunderstanding) but merciless attack by her self-destructive husband. Released in two parts, Many Enchanting Nights is a deliberately paced but always enjoyable exercise in suffering, miscommunication, flashes of lurid teen sexuality, impotent male rage, and female fortitude. There are many accessory pleasures as well. When our young lovers visit a bar, the theme from Johnny Guitar is rendered on electric guitar. 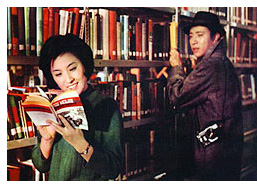 [6]The flirtation with incest in Many Enchanting Nights comes out with force in another Chiung Yao adaptation, Yeung So’s The Stranger (1969). A college girl is shadowed by a mysterious older man, and after he introduces himself she starts to fall in something like love with him. But flashbacks reveal to us that this attraction is, to say the least, misplaced. One odd aspect of this movie is the fact that until the climax we never see the face of the girl’s mother; her back is to us, she’s in shadow, or she doesn’t get a reverse-shot. Did Wong Kar-wai borrow this for his oblique portrayal of the spouses in In the Mood for Love? Like Many Enchanting Nights, The Stranger shows a flair for striking ‘scope compositions and saturated color design. And again we get those pop-in and pop-up frame entrances.

The most renowned Grand film that Li Han-hsiang supervised is At Dawn (1968), by Song Cunshou. It’s a restrained but shocking attack on Chinese trial procedures. A young man goes off to his first day as a bailiff and is appalled by the fact that torture is used to extract confessions. Will he accept this for the sake of keeping a job, or will he quit? Unusually subdued, set mostly at night and in darkened interiors, At Dawn is a remarkable study of weakness and bad faith, and it deserves its fame as a Taiwanese classic.

Li and his lens

At the beginning of the 1970s, when he returned to Hong Kong, Li Han-hsiang was apparently settling into the style that would characterize his work for many more years. He was cutting faster. Lady in Distress and A Mellow Spring are shot in leisurely fashion, averaging, respectively, 10.4 seconds and 16.1 seconds per shot. In the late 1960s, The Winter comes in at 6.5 seconds, Storm over the Yangtse River runs 4.7 seconds average, and Li’s episode of Four Moods (1970) averages 4.6 seconds per shot. Of the late films I’ve seen in the retrospective, the averages run from about five seconds down to less than three (in Passing Flickers, 1982). These shot lengths are comparable to the quick cutting in the kung-fu films of the period.

As often happens with accelerated cutting, close-ups of the actors now predominate. Li likes to treat conversations in enormous facial views (not always in focus), quickly intercut on lines of dialogue. We still get the sudden frame-entrance cuts. And he really, really likes zooms.

Nowadays the zoom is flourishing, serving to provide pastiche (Tarantino in Kill Bill) (2) or add “energy” to a scene. But in the 1970s it was associated with cheap and/or incompetent filmmaking. That wasn’t entirely fair: Truffaut and Rossellini had made good use of it in the 1960s, and Visconti, Fellini, Bergman, Satayajit Ray, and other major directors were relying on the zoom at about the time that Li was. So were most Shaw directors, notably Chang Cheh. I argued in Planet Hong Kong that martial arts directors like Chang integrated the zoom into the staccato rhythm of combat scenes. No technique is inherently cheesy or superb; everything depends on how it’s used. Does Li do creative things with his zoom?

Not as far as I can see. Sometimes he just zooms in to capture his beloved close-ups, or to create an explosive punctuation (as in kung-fu films). At other times, he uses the zoom, along with panning movements, to break down or reestablish the dramatic space, in the manner of Rossellini’s Rise to Power of Louis XIV (1966). In The Empress Dowager (1975), the young eunuch Kuo (David Chiang) acknowledges that he’s been sent to spy on the emperor (Ti Lung). As the emperor dismisses him, we zoom back.

Kuo leaves, and the emperor looks after him as the camera zooms to an even fuller framing.

The emperor turns away and walks to the right, the camera panning to follow.

Once the characters are settled into a new arrangement, Li zooms in on one advisor as he talks with the emperor.

Played out in a single shot, the passage uses the zoom to substitute for cut-in close-ups. To get fresh angles on his players Li doesn’t change the camera setup but rather makes them shift position. The pan-and-zoom combination can be found in many 1970s films, from Hong Kong and elsewhere.

For Hong Kong fans, it offers rare glimpses of the Shaw film factory’s work routines. We see Mitchell cameras, and we learn that the staff stored each actor’s period makeup and whiskers in a labeled box for quick access. We see the Hair Man fix coiffures, glue on beards, and occasionally manicure pubic regions. There’s also satire of local movie celebs, including a portrait of the sneaky independent producer Zhao (= Golden Harvest chief Raymond Chow?).

Tedious and mostly unfunny, Passing Flickers suggests that Li relaxed into an attitude of simply enjoying what he could get away with. Of his quickies, he remarked: “I made those film with my heart and soul. They may look like crap to you, but they’re gems to me.” Even in his hack days, Li remained a central figure in Hong Kong film.

(2) The script [8] for Kill Bill includes the instruction, “We do a quick Shaw Brothers zoom into her eyes.”

Lisa Lu in The Empress Dowager.