Films from the Fragrant Harbor

Sorry to be late with this posting from the Hong Kong International Film Festival. The last three days have been mighty busy, including a morning of roundtables with journalists and local critics, a supper with Mr and Mrs Johnnie To, an encounter with Ringo Lam, and other escapades. Plus heavy viewings of classics by Li Han-hsiang. I hope to blog about all this before I leave on Thursday. In the meantime, I’ll catch up on what any good festival is about…the films. Or rather, the ones I’ve liked most in the last few days. 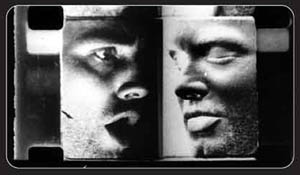 Paolo Gioli has been making experimental films since the 1960s. From one angle, his approach converges with the work of filmmakers like Ken Jacobs and Ernie Gehr. Gioli employs optical printing and other techniques to halt, fragment, and superimpose images, many of them from found footage. Perforations flutter across the screen and framelines dance; single-frame montage imparts hallucinatory movement to a static picture; negative and positive images bounce off one another. The very concept of a shot or of a film frame dissolves in this lovely work.

But Gioli’s originality goes beyond the tradition of recasting found footage. Anticipating recent gallery artists who rig up their own movie machines, he films with pinhole cameras made of buttons or seashells, or uses leaves to create an extra shutter. The results can be aggressive or lyrical, and I found them completely fascinating. The first of four programs of his work was my first sight of Gioli’s work. How could I have missed it?

All the five films in the set, mostly from the late 1960s and early 1970s, were very impressive. In Traces of traces (1969), the abstract whorls and speckles are made from filmstock pressed upon his skin and fingertips. According to My Glass Eye (1971) assaults us with a flurry of Muybridge-like postures and fluttering close-ups, all to a threatening drumbeat.

My favorite was the gentler Anonimatograph (1972), recomposed from a 35mm home movie from the 1910s and 1920s. The shots settle into layers, and as they peel off we see people in different phases of their lives, sometimes studying each other across the years. Family portraits become eerie silhouettes and cameos. Even gouges on the emulsion serve as testimony to time gone.

Mark McElhatten, an expert on experimental film, provided the catalogue essay and an enlightening introduction to the screening, as well as an after-film discussion. He pointed out Gioli’s fascination with the textures of the human body as they are shaped by time and space, and then captured on the skin of film itself. Film as a tactile medium: No surprise that Gioli is also a sculptor.

You can read more about his work in Mark’s detailed essay [1] for a Lincoln Center retrospective. This [2] is Gioli’s suitably sparse website, and here [3] is a site offering a DVD collection (unhappily not including Anonimatograph). 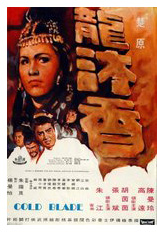 [4]Cold Blade (1970) is a very different affair. This swordplay classic directed by the versatile Chor Yuen for Cathay has been fairly hard to see. (My first viewing came in 1997, at a Brussels retrospective.) The print screened by the HK Film Archive was restored from a Cathay negative, supplemented by sound from a copy held by Marie-Claire Quiquemelle of Paris. The result was a stunning print with vibrant color. The story of the restoration can be found here [5].

Cold Blade begins with a graceful title sequence showing our two heroes practicing their signature moves in slow motion and floating aerobatics. These maneuvers will of course prove important at the climax. The story was written for the screen, but it’s as full of twists and double-dealing as a martial-arts novel. The cutting is frantically fast (average shot length of 4.4 seconds!) but always intelligible. Chor Yuen provides his characteristically crammed fight scenes. His long lenses create layers of pulsing foreground movement that yield intermittent views of his protagonists. All in all, a satisfying reminder of the first golden era of Hong Kong action film. 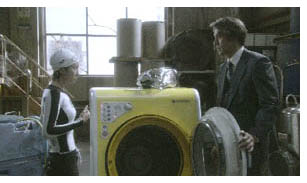 [6]Then there was Baba Yasuo’s Bubble Fiction: Boom or Bust (2007), an international premiere that drew huge crowds and big laughs. Here’s one Asian film that won’t be remade in Hollywood; it’s already an unembarrassed riff on Back to the Future. Mayumi, a ditzy bar hostess, tries to prevent Japan’s financial collapse by returning to 1990 and blocking corrupt legislation. Her vehicle: a lemon-yellow Hyundai washing machine.

Naturally, Bubble Fiction is filled with retro music, dances, fashions, and hair styles, with plenty of in-jokes about J-pop culture and references to its Hollywood source. “Don’t tell me you came in a DeLorean?” a skeptic asks our heroine. Bubble-era Japan is tellingly satirized, with profligate salarymen in loose suits lined up and waving banknotes to flag down cabs. The director painstakingly reconstructed the Tokyo of the time, including elaborate desserts and hand-punched train tickets.

Of course catastrophe is thwarted, and Mayumi comes back to a sunnier future, having gained a father and a new place in the community. Lighter than air, full of ingratiating gags, and cleverly crafted on Hollywood’s script model, Bubble Fiction proved just the sort of good-natured movie that I needed after 3 ¼ films earlier that day. Fragrant Harbor filmmaker Tsui Hark once wisely remarked: “Sometimes it’s fun to be stupid.”

For credits and further info, check out the Pony Canyon site [7] and Russell Edwards’ Variety review [8].

In the wake of Infernal Affairs, Hong Kong movies have been filled with undercover cops turning confused, bitter, and suicidal. On the Edge (2006) from the Herman Yau retrospective here at the festival, is one of the very best. Like Yau’s From the Queen to the Chief Executive, this starts from a social fact: Most moles returning to duty don’t last more than a few years. Why? On the Edge explores the possibility that the friendships forged in the underworld are more authentic and durable than the stern bureaucracy of law and order. 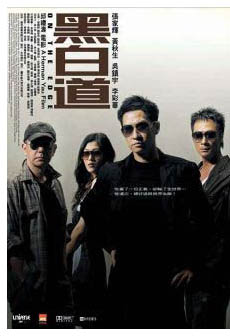 [9]The film begins with mole Nick Cheung betraying his father-figure Francis Ng. When he tries to readjust to life in the force, other cops keep away, Internal Affairs bureaucrats trail him, and he’s kept out of the loop. His new partner Anthony Wong goads him and flagrantly pounds up suspects, as if to prod Nick into defending the lowlife he once moved among. He sinks into alcoholism and tries to win back his girlfriend. A finely judged scene shows him revisiting a nightclub at which he’d once won the Triads’ trust. He shifts awkwardly between the bravado of a gang member and the panic of an outgunned policeman.

Thanks to a flashback structure, we see Nick’s rise in the gang juxtaposed to his slump once he’s back in uniform. Without being heavy-handed, the film juxtaposes a scene of Nick trying to return to civilian life with a parallel moment in his Triad days. It isn’t easy to advance two stories at once, but Yau manages it easily. There are also many sharp character bits, expressed—as customary in Hong Kong films—through confrontations and combats. A scene in nightclub builds tension as Ng and Wong, crook and cop, seize karaoke microphones to bark challenges to one another.

Without recourse to the flourishes of a certain Hollywood film on a similar theme, On the Edge exposes the anguish of a man cut adrift from the world that gave him his identity. Simple and modest, but with subtle touches (watch out for the disabled man on the handcart), Yau’s B-film aesthetic deals straightforwardly with plot, character, pungent locations, and a fine cast. You don’t need portentous symbols like a rat skittering along a condo railing. Just tell the story of one man who lost himself.