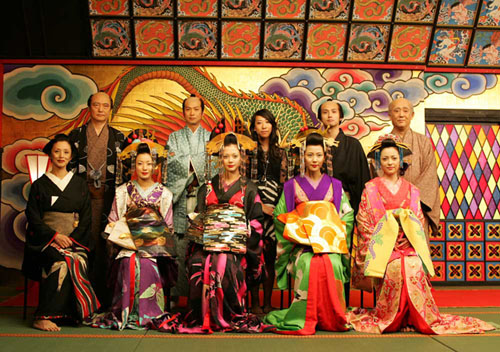 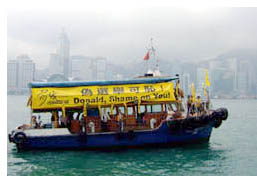 [1]While I’ve been here, Hong Kong has been embroiled in two big stories. First is the runup to the election for chief executive. Hong Kong has indirect elections, whereby groups purportedly representing constituencies, chiefly various business interests, are in turn represented by electors. On the day of the vote, I saw several demonstrations demanding both new environmental policies and universal suffrage. So much for the myth that Hong Kong people don’t participate in politics.

The other big story has been the aftermath of a 2006 shootout involving police constable Tsui Po-ko. The latter has the confusing intricacy of a Hong Kong cop movie. Some years ago Tsui allegedly killed another cop and stole his pistol; a year later he robbed a bank. (The Economist offers a summary here [3].) An inquest has been under way. Wednesday’s South China Morning Post (not available free online) reports on the contents of Constable Tsui’s notebooks. There are indications that he was tailing political figures and calculating how an ambush might be carried out beneath traffic underpasses.

The media have gone wild over this and even replayed the episode of the local version of Who Wants to Be a Millionaire? on which Tsui appeared as a contestant. Today’s edition of the SCMP reports an even weirder turn. An FBI expert has testified that Tsui suffered from schizotypal personality disorder. This is characterized by “social isolation, odd behavior and thinking, and often unconventional beliefs.” Sound like you or me?

Moving to the more comforting world of cinema, let me catch up on some of the films I’ve seen at Filmart and the Hong Kong International Film Festival.

Ying Liang’s The Other Half: A shrewdly constructed story about a young woman with marital troubles who becomes a legal stenographer. Ying interweaves her life crises with the monologues of locals who come to seek action from the lawyer. These incidents were derived, Ying explained in the Q & A, from actual cases the non-actors knew. Ying collected over 100 law cases and then showed his script to lawyers and legal professionals, some of whom appeared in the film. Single-take scenes predominate, making good use of the deep-focus capacities of digital video. A vivid angle into ordinary life in China, with insights as well into problems of industrial pollution.

Li Yu’s Lost in Beijing: Less interesting, I thought. A fairly traditional melodrama involving an innocent woman caught between two macho men, husband and boss, and the boss’s scheming wife. The glimpses of life in Beijing were more valuable than the supposedly scandalous sex scenes that feature heavily in the early reels.

[4]Derek Yee’s Protégé: Yee is a mid-range Hong Kong director who can turn out solid entertainment and sometimes, as with One Nite in Mongkok, some social criticism. In Protégé, you know you’re in for a rough time from the start. A smack-addled mom staggers onto a sofa to die, and her little girl waddles over to yank out the needle and drop it carefully into a wastebin. Whether you love or hate The Departed, Protégé reminds us that Hong Kong film can chop closer to the bone than anything from our purportedly hard-edged directors.

Daniel Wu plays an undercover cop who’s taken years to become virtually a son to drug kingpin Andy Lau. Their intriguing relationship counterbalances Yu’s efforts to wean an addicted mother off the stuff. There are some fascinating quasi-documentary scenes of cooking heroin and harvesting Thai poppies. The parallels between the drug addicts whom Andy despises and his own need for shots of insulin are insinuated, not slammed home. Yee mixes grim realism with some showy melodrama, adding an explosive drug bust. (That sequence contains a startling shot that in itself justifies the existence of CGI.) Despite an overlong denouement and a few loose ends, the film seems to me better than the average local genre fare.

Ninagawa Mika’s Sakuran: Anachronism has a field day in this story of a cunning girl’s rise to be top geisha. Riotous sets and costumes, along with big-band swing music, create the suffocating but ravishing world of courtesans and their patrons. A sentimental ending telegraphed far in advance, but no less welcome for that.

[5]Nicole Garcia’s Selon Charlie: Screened in Filmart, this 2005 pic seemed to me a solid if somewhat academic drama. A network narrative about a fugitive archaeologist in a town full of philandering husbands and bored wives, it’s your basic bourgeois life-crisis tale, decorated with parallels to a mysterious hominid found at a dig site. It has the usual Eurofilm tact and shows how the French have adapted Hollywood’s screenplay structure to fit the well-upholstered stories they like to tell.

Benoît Delépine and Gustave Kervern’s Avida: Black and white almost throughout, in 35mm that looks like muddy 16, this surrealist pastiche starts strong. Early scenes offer a new riff on Tati’s Mon Oncle, in which a toff returns to his cyberautomated mansion and encounters problems with dogs and plate glass. Then we’re in Buñuel-Carrière territory (Carrière is in the movie), as a dognapping leads to an amazing scene of pooch decapitation. Things seemed to me to drag as the episodes got sillier and less visually expressive. Rhinos, lions, elephants, big beetles, and a highly diverse sampling of the human species do walk-ons. Not so much metaphysical as pataphysical.

Iran: A Cinematographic Revolution: A documentary [6] on the pre-1990s Iranian cinema. It’s informative, cautious about the role of the mullahs, and filled with intriguing clips from Hollywood-style melodramas and the neorealist-flavored efforts of the 1970s. Good talking heads too (though no Kiarostami). The film reaffirms how single-mindedly the cinema agencies pursued film festivals as a way of increasing the profile of the nation’s culture; the motto was “No festival without an Iranian film.” But can Iran really have trained a total of 90,000 film-related workers, as the docu says?

Johnnie To’s Exiled: I hadn’t yet seen it on the big screen. That’s where it belongs. The first sequence evokes Once Upon a Time in the West‘s opening, and it’s followed by an exhilarating, utterly implausible gun battle. Watch out for that spinning door!

When Mr. To previewed this opening for me last spring, I didn’t think he could top it, but he does. The later scene in the underground clinic will rank with one of the great action sequences of all time. I won’t spoil it for those who haven’t seen it by previewing a still. Let’s just say that To finds fresh compositional tactics in close quarters, as in the hotel climax.

Full of visual invention and neat character bits, Exiled shows that To keeps trying new things. I wrote a little about To’s style [7] in an earlier post, and some backstory on the Exiled rooftop sets can be found here [8]. 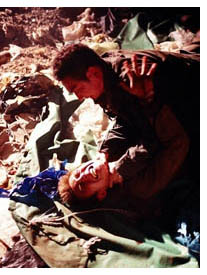 [9]Cheang Pou-soi’s Dog Bite Dog: This tale of a hired killer from Thailand and the raging young cop who pursues him presents a world in Hobbesian frenzy, with all against all. The most unrelentingly violent Hong Kong film I’ve seen in years, Dog Bite Dog starts with imagery of the killer hiding in the bowels of a ship, scraping up flecks of rice from the floor. After consummating his hit, he moves through a landscape of garbage, hiding out in a landfill and rummaging in a recycle bin for scraps to doctor a girl’s wounded foot. I don’t know any film that insists so intently on the textures of urban offal.

The cop trembles under the pressure of his own torments, and the parallels between the two men climax in a knife fight in a crumbling Thai temple. As is often the case in local cinema, Father is to blame. This visceral movie surely couldn’t be released theatrically in the US. Even the most jaded action aficionado is likely to flinch from certain scenes.

Cheang’s previous film is the suspenseful Love Battlefield. Of Dog Bite Dog he remarked, “I wanted to show [the audience] this Hong Kong film that does not have choreographed action.” For more, see Grady Hendrix’s coverage here [10] and Twitchfilm’s longish review [11].

Otar Iosseliani’s Gardens in Autumn: The first shot, in which old men quarrel over which one gets to buy a cheap coffin, puts us firmly in Iosseliani’s parallel universe. As often, he speaks for those who just opt out. A minister of agriculture loses his post and drifts among ne’er-do-well pals, hookers, and girlfriends. A film about drinking, eating, smoking, rollerblading, music-making, and middle-aged sex, Gardens in Autumn also satirizes the rich, who are just as lazy as our heroes but waste their lives shopping. There are also prop gags, including the pictures of heifers and boars that show up in quite unexpected places. 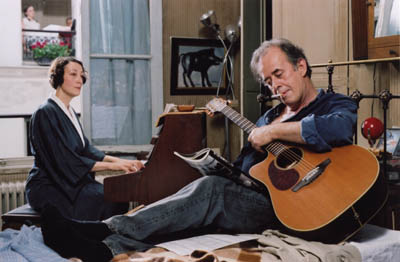 Iosseliani casts himself as an easygoing gardener who draws cartoons on a cafe wall. Some of these images recall people and shots we see in the movie, as if we’re watching the old buzzard create the film between swigs of vodka. An elegiac poem to the subversive force of idleness, with a final scene celebrating women. 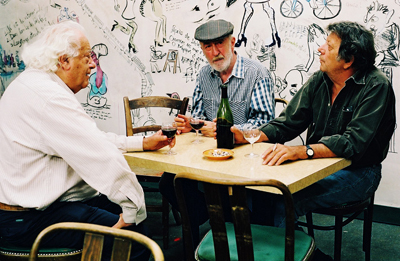 Over the next couple of weeks, more frequent posts, I hope, including glimpses of this highly photogenic city. For the moment, this from a double-decker bus must suffice. 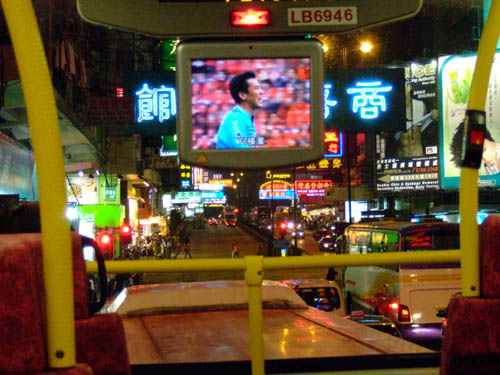