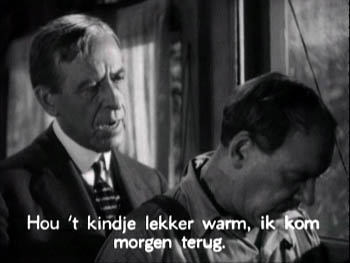 Some jottings from DB: 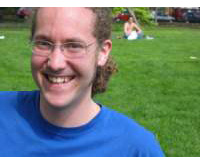 [1] Tim Smith, who studies how we perceive film, recently visited our department at the University of Wisconsin–Madison. His talk was splendid.

Tim studies the ways we scan shots and shift our attention across cuts. His talk was illustrated with film sequences showing little yellow dots swarming around the frame; these indicate the points in the image where his subjects’ glances landed. Tim shows pretty conclusively that there’s a consensus about where viewers look during a shot (faces, movement, the center of the frame) and that classical continuity cuts can push our attention to and fro with remarkable facility. One of the most surprising findings was that viewers are often starting to shift their attention to a new frame area just before the cut comes. Why? Tim has some intriguing suggestions.

Tim also showed some remarkable effects of what I’ve called “intensified continuity,” the fast-cut close-ups that characterize so much current cinema. Because these passages leave no time for visual exploration, viewers seem to revert to a cursory test for the shot’s basic point, usually at the center of the frame. Tim’s examples from Requiem for a Dream were fascinating, showing how real viewers are playing catchup in very fast-cut sequences.

This is rich and promising research, showing once more that Leonardo da Vinci, Eisenstein, and a few others were right to think that many creative choices in the arts can be studied with the tools of science. It also shows that filmmakers, like other artists, are seat-of-the-pants psychologists, achieving complex effects through decisions that “feel right” and that they have no need to explain theoretically. That’s our job.

For Tim’s narrative of his visit, and a lot more about his research program, go here [2]. For something not quite completely different, about eye-tracking, print ads, and crotches, go here [3].

The enterprising folks at Turner Classic Movies have discovered six RKO films [4] that have been missing for many years. It’s a harvest of 1930s titles, promising some intriguing situations (e. g., Ginger Rogers as a telemarketer) and carrying the names of directors like William Wellman, John Cromwell, and Garson Kanin.

A Man to Remember (1938; at the top of this page), Kanin’s first film, is the only one of the batch I’ve seen so far. One of the New York Times‘ ten best films of 1938, it went virtually unseen until a print surfaced at the Netherlands Filmmuseum in 2000. A Man to Remember is a portrait of a small-town doctor who tends to the poor and lets others, chiefly a cadre of corrupt businessmen, take credit for his good works.

It could all be mawkish, but Edward Ellis plays the doctor as a testy guy who levels with his patients and wins the town’s respect through quiet cussedness. The performance echoes Ellis’ crabby but likable inventor in The Thin Man (1934). Dalton Trumbo’s script has an intriguing flashback structure, less bold than in The Power and the Glory (1933) but still ambitious for a B project.

The six RKO discoveries are screening on April 4th as an ensemble, then they’re scattered through the rest of the month. All should be worth checking out. Once more TCM proves itself the film-lover’s channel of first choice.

David Mamet’s Bambi vs. Godzilla: On the Nature, Purpose, and Practice of the Movie Business (Pantheon) is as pungent and eccentric as you’d expect, but also deeply traditional in its storytelling advice. A movie’s characters must have goals, and over the course of three acts they achieve them, or definitively don’t. The Lady Eve is Mamet’s model of this construction. Furthermore, three questions structure every scene: Who wants what from whom? What happens if they don’t get it? Why now? In wide-ranging essays, Mamet pays tribute to the craftsmanship of below-the-line talent and celebrates movies as various as The Diary of Anne Frank and I’ll Sleep When I’m Dead (whose protagonist is remarkable for “his personification of enigma”).

Mamet adds a fair amount on editing, supplementing the remarks in his Pudovkin-flavored On Directing Film. For instance: “At the end of the take, in a close-up or one-shot, have the speaker look left, right, up, and down. Why? Because you might just find you can get out of the scene if you can have the speaker throw the focus. To what? To an actor or insert to be shot later, or to be found in (stolen from) another scene. It’s free. Shoot it, ’cause you just might need it.”

Mamet bemoans the script reader, whose motto must be Conform or Die. By contrast, Blake Snyder makes conformity seem fun and–well, if not easy, at least attainable. His Save the Cat! The Last Book on Screenwriting You’ll Ever Need (Michael Wiese Productions) bulges with formulas, recipes, and gimmicks.

Like Kristin and me, Snyder treats the Second Act as really two sections, broken by a midpoint. But for him three acts are just the beginning. He demands that there be an Opening Image (on script p. 1), Theme Stated (p. 5), Catalyst (p. 12) and on and on until we get the Finale (pp. 85-110) and the Final Image (p. 110). This is the most strictly laid-out cadence I’ve seen; it would be fun to see if actual scripts adhere to it. In addition, you get catchy tips like Save the Cat! (show the protagonist doing something likable early on) and the Pope in the Pool (burying exposition). Snyder includes a list of the most common screenplay errors. An enjoyable read with some hints about construction I hadn’t encountered before. 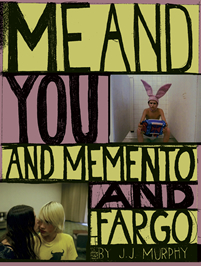 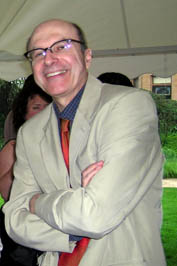 J. J. Murphy is an old friend (we went to grad school with him in 1971) and colleague (he teaches in our department). Renowned as an experimental filmmaker, he has turned his attention to American indie cinema. His new book Me and You and Memento and Fargo: How Independent Screenplays Work offers an in-depth analysis of several recent films. J. J. shows how they obey mainstream conventions of construction while still innovating in other ways. I especially like his discussions of Hartley’s Trust, Korine’s Gummo, and Lynch’s Mulholland Dr. I think it’s a book that everyone interested in current American cinema would find stimulating.

You can find out more about it, and read an excerpt, here [5]. Congratulations, J. J.!