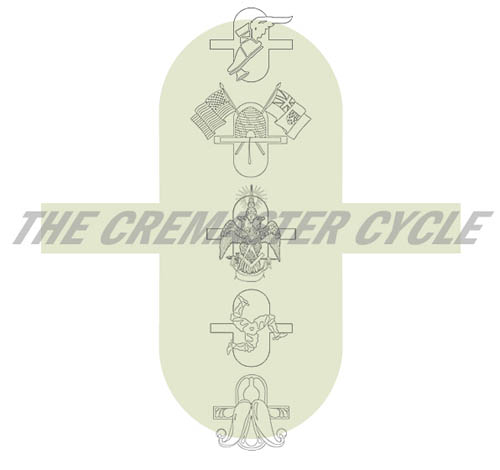 The week before last brought Matthew Ryle to the UW–Madison campus for a talk and a panel discussion. As Ryle pointed out, it’s hard to decide exactly what he should be called. He has the title of Chief Fabricator at Matthew Barney’s studio, and in Barney’s Cremaster film cycle he serves as Production Designer. He’s been called a Set Designer too, and he assists in the making of sculpture pieces that Barney exhibits in museums. Ryle is an important artifact-maker in his own right, having built the tallest sign in North America.

[1]Nobody could have been more unpretentious than Matt Ryle, in olive sweatshirt and blue jeans, explaining the whys and wherefores of Barney’s enigmatic art. He gave a concise introduction to Cremaster 2, pointing up its reliance on Mailer’s nonfiction novel about Gary Gilmore, The Executioner’s Song. After the film, Ryle talked about the film’s Mormon and Masonic symbolism and the connections that Barney finds among killer Gilmore, Houdini, and the 1893 International Exposition, which Barney relocates from Chicago to Alberta, Canada.

Ryle discussed some of Barney’s filming procedures too. Barney shoots plenty of coverage, with many angles to permit inserts and matches on action. He favors delicate and lustrous lighting, both in the exteriors and the interiors, many of which are studio sets. Cremaster 2 cost about $1.7 million, and it looks it. There is ambitious CGI work in the Mormon Tabernacle, and the imagery is often spectacularly beautiful, showing off the landscapes of the Bonneville Salt Flats and Canadian glaciers and enticing props like the glittering mirrored saddle and the shapely furniture that surrounds the players.

For those who haven’t yet heard, Cremaster is a series of five films made between 1994 and 2002. Each one suggests a narrative, but it doesn’t give us a traditional plot. Rich in surreal details, the action presents humans and fantastic creatures, most in fairly static postures or caught in repetitive actions. They exist in vacant spaces, either colossal ones, like a blimp or the Utah landscape, or cramped chambers. Their actions and circumstances work out Barney’s private mythology, which is based on the descent of the testes during the embryo’s development in the womb. (The cremaster is the muscle that controls the contractions of the testes.) As in the paintings of Salvador Dalí (another artist interested in bodily penetration and drippy fluids), the actions we see symbolize public and historical events, but at one remove and filtered through esoteric symbolism. 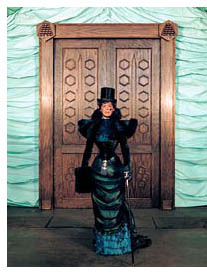 [2]Cremaster 2, which we saw last week, is one of the most accessible installments, but it’s still very opaque. It begins with imagery of stupendous horizons, some tipped vertically. We’re introduced to several figures who’ll recur: an astonishingly wasp-waisted woman, a young man and woman who seem to be consulting her for advice, Harry Houdini being trussed up for an escape, and a desperate man parked at a gas station. There are also some isolated actions, most memorably a man and woman in coitus, with her pinched waist encased in a plastic girdle. There are bees, honey, saddles, cowpokes, and petroleum jelly. The film interweaves these materials around certain emblematic actions. Crucially, the young man in his Mustang (which is coupled by fabric to another Mustang) shoots the station attendant and eventually is executed by means of a rodeo bull-ride.

I saw the Cremaster cycle at the end of summer 2003, when it ran at one of Madison’s art cinemas, the Orpheum. It was a pretty strange venue for this work, since in its heyday the old picture palace once ran Fred and Ginger movies. The Sunday I went, the entire cycle was screened in numerical order. I thought that some installments were very engaging, especially no. 5, a sort of operatic music video set in Budapest. Most of the others offered quite arresting imagery but seemed to me protracted and overbearing in their symbolism. By the end of the day my own cremaster was protesting.

Watching Cremaster 2 last Thursday, I was again absorbed by its imagery and, alas, still resisting the clanking 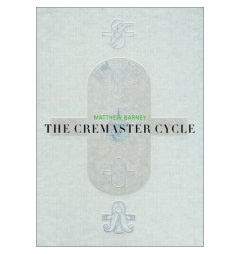 [3] machinery through which every figure, gesture, setting, and surreal juxtaposition called out for some Meaning, however elusive. In a tradition that runs back at least to Ulysses, Barney cooks up an interpretive feast for critics. The monstrous book [4] treating the films and the kindred photographs and objects is, like the movies, at once luxuriant and fearsome. It starts with a ninety-page essay by Nancy Spector that explicates the films’ symbolic dimensions. Here’s a sample, from a discussion of Cremaster 4:

The Loughton Ram, with wool dyed red and all four horns decked in ribbons of yellow and blue Manx tartan, stands at this junction—a symbol for the total integration of opposites, the urge for unity that fuels this triple race. But before the three entities—Candidate, Ascending Hack, and Descending Hack—converge, the screen goes white and silent. This blankness bespeaks the annulment of desire. (63)

Just what I’d feared: every little movement has a meaning all its own. In addition, the essay’s prose style is forbidding in its rodomontade.

With his simple diagram of the field emblem Barney libidinizes architectural space and the surrounding environs, which come to represent the externalization or materialization of inner drives (8).

Anyhow, I just wanted to use today’s blog to externalize, or materialize, or maybe even libidinize, three hypotheses about Cremaster 2.

1. It is Big Art, All-Enveloping Art. It wants to meld many systems of meaning: religion (Mormonism, Judaism), science (fetal development, geological change), history (the Columbian exposition, Gilmore’s killing spree), literature (Mailer’s novel), and more. In this it belongs to a tradition of omnivorous artworks, from Ulysses and Finnegans Wake down to Pynchon, Syberberg, and Greenaway. The artist as demiurge, creating a master-scheme whose correspondences radiate out to many cultural systems: Eisenstein may have been the first filmmaker (in his unmade Moscow project) to attempt something on this scale, but he wasn’t the last.

At the same time, Postmodernist art characteristically absorbs these vast systems in an oblique way, through roundabout citation. I think of Robert Wilson’s Theatre of Images and his collaboration with Philip Glass on Einstein on the Beach. In a rarefied arena, obscure or trivial actions are played out, mysteriously referring to historical events or other artworks. If you don’t know the role of trains or violins in Einstein’s life and thought, you’re arrested by the pure juxtaposition. If you catch the cites, or more likely do your outside reading, you’ll discover an associative logic binding the tableau together. The same strategy of obscure allusion is on view in Glass’s theatre piece about Muybridge, The Photographer. 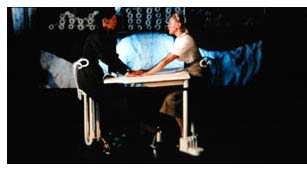 [5]Something similar happens with Cremaster. As Matt Riley pointed out, Barney’s tableaus can tease you into doing research to find connections, however tenuous, among Gary Gilmore and Harry Houdini, or the Mormons and a Sinclair gas station. But to his grand synthesis, Barney has added autobiography. As in the work of Dalí, Cocteau, and Joseph Beuys, veiled references to public history are mixed with wisps from the artist’s life—in this case, an athletic career and modeling in New York. Beuys’ animal fat (recalling his purported plane crash during World War II) finds its equivalent in Barney’s petroleum jelly, used to keep his shoulder pads flexible during a football game.

These films assign you homework. Fortunately we have cheat sheets. Like Joyce and Greenaway, Barney has explicated his work’s public and private mythology. The bare bones are laid out on the cycle’s official website [6]. Since free-associative interpretation is the modus operandi of most academic criticism, highly associative art like this has the effect of playing to commentators’ strengths. The Cremaster book includes not only Spector’s blow-by-blow explication but also an imposing glossary, with entries running from anus-island to zombie, illuminated by snippets from fiction and literary theory. Barney will keep critics very busy for a long time: Some Cremaster scenes are as iconographically dense as a mannerist Annunciation.

2. Stylistically the films go down like milkshakes. There may be less here than meets the eye, but what meets the eye is pretty gorgeous. The installments have the smooth cutting and meticulous compositions of Cocteau’s Orphée. Their limpid camera movements, swooping helicopter shots, and luscious color design could pass muster in a Hollywood production. The films flaunt their production values, and you could argue that this can make them attractive to young people who might find rougher-edged or lower-budget experiments by Ernie Gehr or Lewis Klahr harder to take. Though the shots run moderately long (averaging 9-10 seconds in the films I clocked), the insistence on close-ups, arcing camera, and slow zooms recalls that cluster of current Hollywood techniques I’ve called “intensified continuity,” and this helps contemporary audiences concentrate on the tableaus.

[7]Another user-friendly aspect, touched on in the panel discussion: The echoes of the horror film. We’re on edge from the start of Cremaster 2, with Jonathan Bepler’s rumbling score rising dissonantly as the bleeding logo hurtles out at us, looking like a thorny torture device. The dripping nose and bolted mouth of Baby Fay la Foe, the bees swarming over the thrash-rock musician as he makes a call, and the bloody body of the gas station attendant offer us some fairly pure horror-movie iconography. It could just as easily be called Creepmaster.

3. Might not this be the Artworld’s parallel to a Hollywood blockbuster franchise? The Cremaster films are designed chronologically, like sequels are. They have spawned fan videos [8] and fan music. They spin off ancillaries, such as the souvenir volume I’ve already mentioned, along with T-shirts [9], baseball caps, and coffee mugs. Since this is the Artworld, though, the real ancillaries are the photographs, drawings, and sculptures that tour on exhibit. In early 2004 one photo triptych from Cremaster 2 fetched over $186,000 [10]. The film has become a precious object in itself. Only ten institutions, we’re told, can acquire prints, and the series won’t be released on DVD.

Those who think that many contemporary museum shows are really about the shop will find strong evidence here. In today’s art market, Cremaster might be the gallery scene’s equivalent of the summer megapicture, the project that by virtue of its monumental scale and production values generates income at many levels indefinitely. Again, the showmanship of that adroit impresario Dalí comes to mind.

From this perspective, Barney becomes the equivalent of an A-list movie producer or director, overseeing a platoon of artisans like Matt Ryle who bring his vision to life. Cremaster reminds us of the ambiguities in the word studio, applied both to moviemaking and the fine arts. For hundreds of years successful painters have in their studios divided the labor of artmaking, planning the overall design and assigning juniors to fill in bits before the supervisor added his distinctive touch. Warhol revived this in ironic mode with his Factory, often by denying he had a touch by leaving all the work to others. But Warhol’s films struck observers as crude and offhand, while Barney has produced something bold, polished, and overwhelming. If Warhol was the Roger Corman of the Artworld, Matthew Barney may be its Jerry Bruckheimer.

PS: In correspondence Professor Jim Kreul has called my attention to an article that anticipates my third point: Alexandra Keller and Frazer Ward, “Matthew Barney and the Paradox of the Neo-Avant-Garde Blockbuster,” Cinema Journal 45, 2 (2006), 3-16. It considers in detail the relationship of Barney to performance art as well.