Suo worked comic variations on an ingenious theme: How Japanese youth fail to appreciate the beauty of their traditional culture. The garage-band ska singer in Fancy Dance is obliged to retreat to a monastery, where he discovers that Zen is really, really cool. Sumo Do converts sullen college kids to the virtues of ritualized wrestling. Shall We Dance? works in reverse, obliging an uptight salaryman to rekindle his marriage by learning ballroom dance. Suo’s films celebrate pleasurable fusions between Asian and Western cultures.

Suo’s meticulous, understated style is a kind of modern revision of Ozu’s. Fancy Dance and Sumo Do pay homage to the master’s college comedies, and in Shall We Dance? the first tracking shot occurs when the hero takes his first tentative dance steps. In Figures Traced in Light, I mention Suo as part of that trend toward planimetric shooting and compass-point cutting I discussed in an earlier blog [1]. As you see from the opening images, he tries out the precise sort of graphic matching between shots that was a hallmark of Ozu’s style. 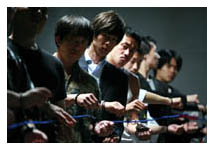 [2]Suo has been very quiet for the last decade, but now he’s back. I Just Didn’t Do It is arousing keen local interest, partly because of its controversial subject matter. Japan is known as a low-crime society, but gradually questions of police brutality have emerged. Suspects can be kept in custody for up to 23 days, and unique among industrial nations, 95% of all people arrested confess!

In Suo’s new film, a young man is accused of groping a schoolgirl in the subway. It’s a daring move for a director known for light comedies. The film stars Kase Ryo, from Letters from Iwo Jima, and veteran Yakusho Koji, seen most recently in Babel. Read more about it here [3], noting that the Economist’s contents tend to evaporate into the pay-only archive. The film’s official website, in English, is here [4].