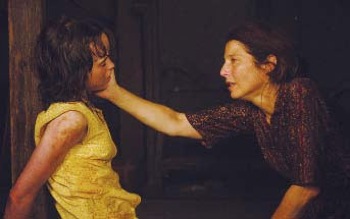 In an article originally called “Sundance Movies Are Bad for You!” but now more tamely titled “The Trouble with Sundance,” [1] Richard Corliss complains that indie movies have become so predictable that they form a genre in themselves. They focus on relationships, especially those of a dysfunctional family or a fumbling love affair, and treat their principals with a dutiful mix of pathos and humor. Where, he asks, are the more imaginative narrative and stylistic maneuvers fostered by the Coen brothers, Jarmusch, Tarantino, and the like?

That’s only half the story. True, indie films are often pallid comedies and melodramas. But just as often, and sometimes at the same time, they’re desperately sensationalistic. In these the formal conservativism to which Corliss objects is wedded to hot-button content. We call a bland Indie film quirky, but there are others we call dark. They’re Indie Guignol.

The very distinction is suspiciously simple, I admit. I don’t deny that there are independent films that manage to be riveting without being either cutesy or stomach-churning. Recent examples are Ramin Bahrani’s Man Push Cart, Phil Morrison’s Junebug, and Julia Loktev’s Day Night Day Night. Some of these even won praise at Sundance. But most such films don’t get the sort of enthusiastic applause that darker efforts do, nor are their makers heralded as iconoclasts.

Where did Indie Guignol come from? As with most things Indie, sex, lies, and videotape was surely an important model, though I suspect that another template was furnished by David Lynch’s Blue Velvet, that Hardy Boys mystery turned fetid. In any case, for a couple of decades the indie scene has taken on ever more provocative themes and subjects, from Suture and Boxing Helena through Happiness and Boogie Nights to Hard Candy and Little Children.

Reports from Sundance indicate that the trend isn’t flagging. There’s a docudrama about men having sex with horses. Hounddog, which Todd McCarthy [2] portrays as a God’s Little Acre for the new century, is already better known as the Dakota Fanning Rape Movie. Reviewing [3] An American Crime, a film about torturing a child, Screen International‘s Mike Goodridge tells us that it centers on “unspeakable and repeated violence and abuse.” Needless to say, he’s full of admiration. “Although often excruciating to watch, it is so well-crafted and well-acted that its portrait of casual savagery in the ‘burbs resonates long after the end credits roll.” In this climate, no wonder that the MPAA is politicking [4] to rehabilitate the NC-17 rating, which would presumably help indie films from studio boutiques get onto more screens.

The central conceit of Indie Guignol is that to be creative in cinema you have to be dangerous. James Mottram’s book The Sundance Kids: How the Mavericks Took Back Hollywood is an informative overview of Indiewood, but too often it equates being a “maverick” and having a “vision” with an adolescent naughtiness. He approvingly reports Fincher’s reaction to the ending of Se7en. “While it reinforced the notion that justice will prevail, Fincher takes a private goulish pleasure in imagining Mills being ‘carted off to be gang-raped by prison inmates.'” Mottram notes, perhaps unnecessarily, that Fincher has a “sour vision of humanity” (155). Likewise, Sharon Waxman’s Rebels on the Backlot celebrates the fact that her “rebel auteurs” made movies that “combined their brutality with humor” (xi), as if violence and comedy didn’t ricochet off one another in virtually every student horror film ever made.

Producer Christine Vachon, who named her company Killer Films, likewise identifies creative energy with edginess. Her book A Killer Life provides informative glimpses into independent production while showing how to create an indie brand based on scandal. For Vachon, indie cinema is outsider art; she tries to “guard a filmmaker’s autonomy and agency” and let him or her tell “unconventional stories” (15).

Actually, only certain kinds of unconventional stories. When Vachon is told that The Laramie Project is focusing on Matthew Shepard’s murder, she replies that she’d rather make a film about the killers and “their reported meth addictions, and the speculation that they had known (and maybe even slept with) Shepard” (19). One in-the-works project is “about the Bakelite plastics family murder plus a little pinch of incest” (209); another is about the killing of the Scarsdale Diet doctor.

Vachon, like most of her colleagues, thinks the indie tradition is dangerous.

The most dangerous movies Killer has made are the ones that reflected the real world back with the least amount of artifice: Kids, Happiness, Boys Don’t Cry. . . What they are, are stories without clear heroes or redemptive “arcs.” People may or may not get what’s coming to them, and those plots spook an industry premised on wish fulfillment and getting the girl (75).

The dismissal of Hollywood genres is characteristic of the Indie attitude. A good movie can be based on getting the girl, as Girl Shy, The Awful Truth, A Man’s Castle, The Apartment, Jerry Maguire, and Tsui Hark’s The Chinese Feast show. Likewise, just because a movie spooks the suits doesn’t mean it’s good. A movie lacking heroes and redemptive arcs and a happy ending may still be a shoddy piece of work.

Perhaps Indie Guignol is picking up on the Gothic turn of the New York art gallery scene, seen in the lucrative Saatchi show “Sensation” and Matthew Barney’s fascination with innards and dismemberment. Just as likely, the indies’ grotesquerie shadows the rise of gore and splatter in the mainstream. From The Silence of the Lambs to Saw, Hostel, and last year’s The Hills Have Eyes, we’ve seen the horror film turn up the dial on nihilism and disgust, and both the low-budget indies and Indiewood have moved in sync. It would be ironic if the vaunted personal visions of Solondz, Larry Clark, and the like were made palatable and marketable by the hyperviolence of the dreaded megaplex movie.

Very often the predictable nonconformist is just as orthodox as the conformist. Long before the sort of recyclings that Corliss identifies, unconventional moviemaking turned out to have its own conventions–unfulfilling or risky sex, pedophilia, damaged self-images, chancy links among the characters. More surprisingly, the daring indie film often trades on the same clichés that haunt program pictures and prestige items. Sunny small towns harbor nasty secrets, manicured suburbs conceal rot, sex is degrading and only an excuse for power plays, rural folk are racist peckerwoods, corporations grind your soul, siblings vie for parental approval, serving in the military makes you a hairtrigger bully, high school is hell, and so is grade school. Dark visions these films may have, but the landscapes and populations they reveal are pretty familiar. The marketing genius of Miranda July’s You and Me and Everyone We Know was to blend Indie Quirky and Indie Guignol with the figures of the kooky woman and the lovable loser well known from romantic comedy.

Despite its well-worn materials, Indie Guignol is treated as trailblazing. Mottram, Waxman, and other admirers consider Fincher, Russell, Sofia Coppola, and their peers as unswerving rebels against the Hollywood tradition. That tradition, represented by Lubitsch, Ford, Hawks, Hitchcock, Borzage, Sternberg, McCarey, Minnelli, Lang, Preminger, and all the rest, is to be pitied for lacking today’s freedom of expression, or even that afforded in the holy 1970s. Yet this condescension doesn’t consider that these studio directors made virtues of their limitations and produced something far more enduring than almost anything on offer from our outlaws. I’m reminded of Truffaut’s remark on the breakdown of the studio system: “We said that the American cinema pleases us, and its filmmakers are slaves; what if they were freed? And from the moment that they were freed, they made shitty films.”

Mottram quotes Christine Vachon as saying of Todd Haynes’ Poison, “All of Todd’s movies confound expectation. That I think is their greatest strength. If people don’t keep making movies like that, the medium will get stagnant and die” (24). But shock value is only one way to thwart expectation. I grant that America’s oppressive political climate encourages us to think that rebellion is inherently virtuous; but some rebellion is just posturing. If Vachon really wanted to confound expectations and tell “unconventional stories,” she would back a film about a woman who voted Republican, served in the military with pride, found a job in a vets’ hospital tending to the Iraq wounded, and never once considered experimenting with autoerotic suffocation by means of a colostomy bag.

I’m not against visceral and disturbing filmmaking. I’ve written appreciatively about hard-edged Hong Kong movies, from Chang Cheh blood feasts to harrowing items like The Untold Story. Buñuel and Stroheim are worthy of respect, as are films like Godard’s Weekend and Cronenberg’s Videodrome. The point is simply that good filmmaking doesn’t have to flay its audience. Ozu, Mizoguchi, Naruse, Dreyer, Renoir, Ford, Tati, Keaton, Hou Hsiao-hsien, Kiarostami–the list could go on indefinitely–present distinctive views of the world. They don’t try to be outlaws; they don’t strut; they don’t trail brimstone; they are not cool. Their films display a mature tact that goes deeper than either quirkiness or bleeding-edge daring.

Most Indie Guignol flaunts itself as cynically knowing, tapping into some dark current that the squares can’t face. The filmmakers I’ve just mentioned have done something that’s rather different and that’s becoming increasingly rare. Their subject usually isn’t life’s corrupt underbelly but the poetry of the drab and the ordinary. Their work is formally innovative, but in quiet ways–ways that have taken us decades to understand. Their films, even when they’re pessimistic, have a poise, nuance, and complexity that most independent cinema never approaches. Instead of talking about being radical, these directors have made movies like grownups. They’ve counted art more important than attitude.