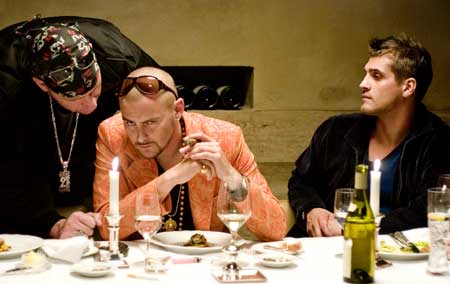 I’d intended to post this at the end of the year, but I fell behind. So in place of the New Year’s entry Kristin and I had hoped to write, we’ll just say: Best wishes for 2007!

And now the blog….

I haven’t bothered to draw up a list of best films of 2006, for lots of reasons. Some acute objections to the very idea of best-films lists are aptly summarized by Andy Horbal [1], and I find them convincing. But there have been practical concerns too.

My December movie-watching was dominated by 2004-2006 Danish films, in preparation for an essay. I think I couldn’t have spent my time better. Instead of being disappointed with critics’ official hits from the US, I was repeatedly excited by ingenious, moving, and enjoyable films….most of which I wouldn’t have known about otherwise.

Historically, it seems, the three greatest national cinemas are those of the US, Japan, and France. Their pervasive influence and their accomplishments in film art, film industry, and film culture make them consistently important in every era, from 1895 to the present.

But a lot of other national cinemas are important too, and I confess a fondness for those less salient ones, what Mette Hjort calls, without disparagement, cinemas of small nations. [2] It’s partly because my academic life has been bound up with not only the Big 3 but a littler 3: Belgium, Hong Kong, and Denmark.

Denmark was the first foreign country I ever visited; I went there in 1970, just before starting graduate school, to do research on Carl Dreyer. I was received so hospitably by Ib Monty, Karen Jones, Marguerite Engberg, and others at the Danish Film Archive, that I came to believe that I could continue to do academic work on cinema.

Over the last 36 years, I’ve felt a kinship with Danish film culture. It has admirable directors like Dreyer and Benjamin Christensen, of course, but also without a lot of fuss the Danes keenly support artistic cinema in a commercial context. I’ve come to respect their open, unpretentious approach to filmmaking and film viewing. I’ve also made many strong friendships with Danish archivists and professors.

The Danish Film Institute [3] not only helps fund most of the 15-20 titles theatrically released every year. It also proselytizes very actively for those films, helping them get festival slots and theatrical releases overseas.(Several Danish items will be screened at Sundance this month.)

The DFI’s job has gotten easier since the arrival of Dogme 95, which galvanized filmmakers around the world and made Danish film the flagship of Scandinavian cinema. Here is Norwegian director Aksel Hennie: “The effect of Dogme on my generation has been immense. More than anything else, it is the Dogme attitude, the ‘anybody can make movies’ idea. As a first time director with no formal training from a small European country, that was very inspiring.”

In 2002, Vicki Synnott of the DFI asked me to write an essay about post-Dogme Danish films for their publication Film, which appears in English in spring, summer, and fall. I reviewed about thirty titles, only a few of which I’d already seen. The result, “A Strong Sense of Narrative Desire,” can be downloaded here [4].

In 2005, Vicki asked me for a more up-to-date piece, and she sent me another passel of films to watch. Hence my December movie marathon, and the essay, which I’ve just submitted. After polishing, it will be published in print and will be available online.

I thought that a good way to start the new year would be to talk about the most intriguing and enjoyable films I saw. Most are little-known outside the festival circuit, and very few are as yet available on DVD. But all are well worth your time. So call it my Best Danish Films I Saw at the End of 2006 list.

The King’s Game (2005) offers journalistic-political intrigue in the vein of All the President’s Men. Efficiently directed and plotted, with some earned surprises, it also features those doyens of Danish acting, Anders W. Berthelsen (Mifune) and Søren Pilmark.

Murk (2005) shows off again the estimable talents of screenwriter (sometime director) Anders Thomas Jensen. A little implausible in the third act, but excellent suspense and fine performances from the ubiquitous Nicolas Bro and Nicolaj Lie Kaas.

Flies on the Wall (2005): Another political thriller, this one for the digital age. A documentary filmmaker (Trine Dyrholm, another fixture of modern Danish film) is commissioned to make a film promoting a political party. She finds a scandal instead. Director Åke Sandgren creates a dizzying montage of footage from the hidden cameras she plants among the offices and in her motel. At a certain point, though, we realize that some of the footage comes from cameras spying on her. 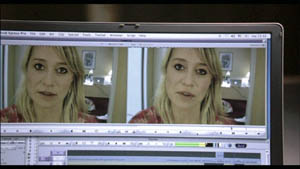 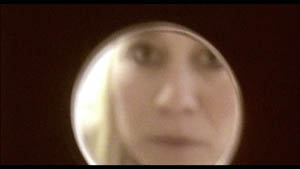 I plan to write more about this rather dazzling movie in another essay.

Ambulance (2005): The idea is worthy of Larry Cohen. A botched bank robbery forces the thieves to hijack an ambulance to make their getaway…with an attendant and a critically ill patient still inside. Unfolding in more or less real duration, the film barrels along breathlessly but still pauses for moments of character revelation and disputes about moral choices.

Pusher III (2005): Even grimmer than the first two installments, but completely gripping in its portrayal of a man whom we should consider utterly degenerate. Nicolas Winding Refn makes the milieu of The Departed look like a ten-year-old’s birthday party. There’s also an intriguing documentary, Gambler (2006) about the financial pressures that forced Refn to make the two final Pusher films.

Clash of Egos (2006): A high-concept satire of the film industry by, once more, Anders Thomas Jensen. Through a legal settlement, working-class Tonny gets a chance to oversee a pretentious movie director’s next project.

Lotto (2006): Danish comedies often have a moral issue at their center, one that’s usually more subtly developed than the morality of Hollywood films. Here the situation is: If you and your workmates pooled to buy a lottery ticket and it won….should you tell them? Another fine Pilmark performance, this time in mild-mannered mode.

Easy Skanking (2006; illustration up top). Originally titled Fidibus, which refers to somebody serving as a gofer for a drug dealer. This is a lively venture into Pulp Fiction and Trainspotting territory, but with a sweeter tone and a happy ending. Rudy Køhnke, Denmark’s answer to the young George Clooney, works for the fearsome pusher Paten, but falls in love with Paten’s mistress. You can check out trailers here [5] and here [6].

Adam’s Apples (2004): A little older, but I had to include it just because it’s one of my favorite films of recent years. Written and directed by Jensen, it tells of a daffily upbeat priest’s efforts to reform convicts, including the skinhead Adam of the title. Tough and warm-hearted at the same time. Mads Mikkelsen, now famous thanks to Casino Royale, plays the priest, with Ulrich Thomsen of Flickering Lights as the edgy miscreant.

Susanne Bier’s After the Wedding (script by Jensen) has already received plenty of praise. It’s another poised, sensitive study of love and family in the vein of Open Hearts (2002), but with a more socially engaged dimension. The protagonist, played by Mikkelsen, has transformed himself from a dissolute vagabond into a worker in an orphanage in India, but his past returns to threaten his redemption. If American critics had seen this film, or if it had been distributed in the US, it would have appeared on many ten-best lists.

1:1: Annette K. Olesen’s tale of the racial tensions surrounding an attack on a teenager. As often in Danish films, psychological drama is balanced by a consideration of social context. The opening credits play out against blueprints and documentary footage detailing the construction of the housing development that forms the center of the action.

Prague (2006): Christoffer, a hard-working businessman, comes to Prague to claim the body of his father, whom he never really knew. His stay leads to a crisis in his past, as he learns his father’s secrets, and one in his present, as he and his wife face the breakdown of their marriage. A severe, engaging film with some of the tang of mid-period Antonioni, starring Mikkelson and Stine Stengade.

A Soap (2006): Pernille Fischer Christensen’s debut has already racked up festival prizes. The action unfolds wholly in an apartment building, where Charlotte (Trine Dyrholm, another fixture of modern Danish film) and the transvestite Veronica (David Dencik) strike up a relationship. Almodovarish, but more subdued (Danes aren’t Spaniards, after all).

How We Get Rid of the Others [7](2007): In the near future, Copenhagen creates laws that eliminate all citizens who take more from society than they give. A dark, 1984ish vision that satirizes how communitarian social policies can turn tyrannical.

The Boss of It All (2006): I’ve already discussed this here [8], and have recently added a couple of updates. Surely one of the most artistically daring films of the year. Funny too.

Bang Bang Orangutang (2005): Simon Staho is virtually unknown in the US, but his previous feature Day and Night (2004) takes minimalist cinema in a new direction. Perhaps inspired by Kiarostami’s Ten (2002), Staho pushes the camera/car conceit toward more classical staging and shooting. His followup, Bang Bang, opens up a bit more–now the camera occasionally leaves the car–but Staho goes on to create new formal constraints. The story? A heartless businessman sinks to the bottom of society and out of touch with reality.

Offscreen (2006): After the Neoromanticism of Reconstruction (2003) and Allegro (2005), Boe, in collaboration with Nicolas Bro, creates a more-or-less fictitious diary film. Bro becomes obsessed with recording his life on video, and that leads him to horrific violence. An absorbing exercise in first-person cinema, with viewpoints multiplied (as in Flies on the Wall) thanks to mini-cams.

Watching these films over several weeks, I was even more convinced that today’s cinema encompasses far more than even the most pluralistic ten-best lists can allow. Lists are helpful for some purposes, but our time is better spent seeking out unusual movies, listed or unlisted.