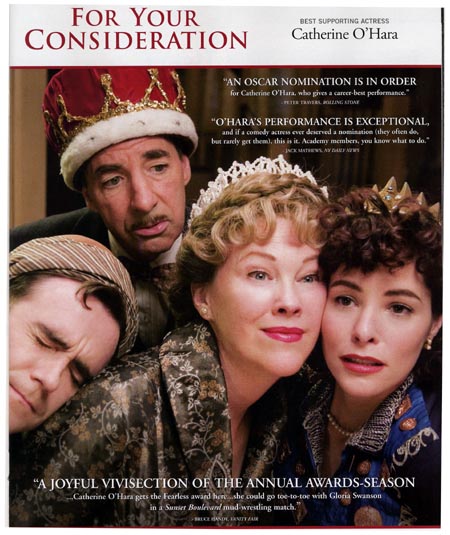 David and I seem to be swimming against the stream of end-of-year blog entries. No ten-best lists, no predictions about Oscar nominations.

Instead, I’ll develop on the theme I introduced in my entry [1] concerning the over-emphasis on star turns in reviews of films that contain an obviously outstanding performance. It’s interesting that quotes from such reviews are now routinely used in the “For Your Consideration” ads in show-business trade journals like Variety and The Hollywood Reporter when a studio is pushing a performance for award nominations.

There are a lot of good performances in any given year. We’ve all seen reviews that call a performance “Oscar-worthy” without the actor ending up getting nominated or even mentioned by pundits at year’s end predicting those nominations. Some types of performances just seem more like Oscar bait than others. What makes them that way?

Some of the reasons are apparent to almost anyone who pays any attention during the awards season. Notoriously, the Academy of Motion Picture Arts and Sciences members prefer to honor dramatic roles rather than comic or musical ones. In 1985, a good deal of outrage was expressed—and rightly so–over the fact that Steve Martin was not nominated for his hilarious turn in All of Me. Conversely, the nomination of Johnny Depp for a comic role in Pirates of the Caribbean: The Curse of the Black Pearl created a stir, though few probably thought that he would actually win. (Remember, just being nominated is an honor, as nominees—and who would know better?—often point out.)

So, actors tend to be nominated for serious roles. Not just any kind of serious roles, though. History teaches us that playing a real person gives one’s chances for a “nod” (as nominations are for some reason now called). From Paul Muni in The Story of Louis Pasteur to George C. Scott in Patton to Ben Kingsley in Gandhi to Phillip Seymour Hoffman in Capote, it’s a familiar pattern. In the television age, when famous people’s appearances and behaviors are often familiar to the public, performances can become in part a matter of impersonation, and a skill at mimicry becomes a strong signal of “good acting.” Undoubtedly a performance like Helen Mirren’s as Elizabeth II in The Queen adds subtleties that go beyond the imitation of appearance and speech patterns and other obvious characteristics, but it’s the impersonation that gets talked about more.

Even when we’re not familiar with the person a character represents, for some reason it helps to have “based on a true story” attached to a title. Publicity often stresses that the actor met and spent time with the real person in order to craft an authentic performance.

Characters with disabilities can definitely put an actor into the Oscar-bait realm: Cliff Robertson in Charly, John Mills in Ryan’s Daughter, Daniel Day Lewis in My Left Foot, or Jack Nicholson in One Flew over the Cuckoo’s Nest.

Presumably the implication of playing a real person or gaining weight for a role or simulating a disability all imply work, harder work than “just” playing a healthy, good-looking fictional person.

There are other indicators for nomination likelihood.

It helps to be old. Think Helen Hayes in Airport or Art Carney in Harry and Tonto. Their best performances? This year Peter O’Toole may finally get a non-honorary acting statuette.

It helps to be English and to have done Shakespeare.

For that matter, it helps to speak English. We’ll see if Penélope Cruz ends up being one of the very few to succeed without doing so. She did get nominated for a Golden Globe for Volver, but foreign-language films are definitely an afterthought when it comes to Academy Awards.

It helps to be Meryl Streep, whose performances don’t even have to fit any of these tendencies.

Oddly enough, most of these generalizations don’t seem to apply as much to the supporting-actor categories. Presumably “supporting” implies a less bravura turn that doesn’t compete with the stars.

Of course there are all sorts of reasons why actors get Oscars. A lot of people were surprised in 1997 when Juliette Binoche (The English Patient) beat out Lauren Bacall (The Mirror Has Two Faces) as Best Supporting Actress. It helps to recall that three years earlier, through a technicality, Binoche had been judged ineligible to be nominated for Best Actress in Three Colors: Blue. The injustice of that clearly rankled Academy members (the majority of whom are actors), and the first time they had a chance to make it up to Binoche, they did. Both Jimmy Stewart and Denzel Washington supposedly won their Best Actor awards because voters felt they had deserved them for previous roles.

On Thursday the Golden Globes nominations were announced. Reporting on the Globes tends to center around their predictive powers for the later Academy Awards. (See “And … They’re Off!” in the new Entertainment Weekly.) The Globes are just as interesting, though, for the fact that they divide the main film-acting awards into two categories: “Drama” and “Musical or Comedy.” (Two parallel best-picture awards are given in these categories as well, but for some reason the supporting-actor awards aren’t divided by genre.) So Sacha Baron Cohen and Johnny Depp can get nominated for comedies and not have to compete against Will Smith and Forest Whitaker in dramas.

If you like endless speculation on nominees-to-be, check out the December 2006 Hollywood Reporter issue “The Actor.” In it Stephen Galloway talks about actors playing real people: “Whether a story surrounding a character is biographical or fictionalized, actors are determined to find the truth behind their real-life role models” (“As a Matter of Fact”). Part of the reason that the trade press devotes so much space to awards speculation is because these special issues sell lots of “For Your Consideration” ads. This year my favorite one touts Catherine O’Hara as best supporting actress. They don’t even have to tell us the title.