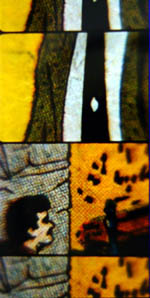 Last Saturday Lewis Klahr came to Madison, brought by the Starlight Cinema group of the University’s Student Union. He showed two sets of films: The Two Minutes to Zero Trilogy (2003-2004) and Daylight Moon (A Quartet) (2002-2004). He’s one of the most gifted collage animators in the American avant-garde, surely the most accomplished since Larry Jordan. Both filmmakers work in the Surrealist tradition, but Jordan seems more drawn to images from nineteenth-century illustration, while Klahr loves US pop culture. As a baby boomer who came of age in the 1970s, he recycles magazine ads, comic books, and book illustrations in lyrical and sometimes aggressive ways.

Tipped off by Tom Gunning, I first encountered Klahr’s work in The Pharoah’s Belt (1993), his most famous film. I also enjoyed seeing his film-within-a-film in Miguel Almereyda’s imaginative Hamlet (2000). At a recent Hong Kong International Film Festival I saw The Two Minutes to Zero Trilogy and decided to study it a bit. I contacted Klahr and he kindly sent me the film, along with Daylight Moon, and some lovely work by Janie Geiser, an accomplished filmmaker in her own right. You can get examples of their work on this DVD [1] from Craig Baldwin (himself an extraordinary filmmaker).

Seeing the Trilogy again, I was even more impressed by it. Each of its three parts consists of images snipped out of old 77 Sunset Strip comic books, with each part implying a bank holdup and a chase, but each time the events are compressed more and more. The last episode runs only one minute. “A feature length narrative compressed 3 different times into 3 separate films of diminishing duration until the synoptic is synopsized,” as Klahr puts it [2].

Don’t try to find a plot. Each episode uses just enough cops-and-crooks iconography to tease us into trying to create a coherent narrative, but it frustrates that in several ways. The images refuse to settle down, slipping and snicking past your eye in an imitation of saccadic glances. The microscopically short snippets recall multitrack sampling. In the Madison Q and A, Klahr called it a “pan and scan aesthetic.”

Sometimes the cartoon panels jerking past the camera create a weird effect of motion. A man dodging into a car with a valise seems to be whizzing off, a woman seems–for only one frame–to wave a sheaf of bills. 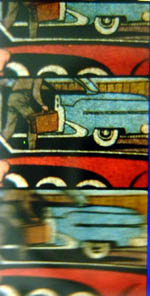 The cutting is rapid-fire as well. I’d thought that Klahr had edited in the camera, but he spliced everything. A certain maniacal precision becomes evident when you can actually look at the images on the strip and see the bold shot-changes, like the one crowning this post. The trilogy evokes the rush of a heist film without ever giving us more than glimpses of what the narrative might be. The sense of action hurtling toward chaos is cranked up by soundtracks using roaring guitar music from Rhys Chatham and Glenn Branca.

Daylight Moon (A Quartet) was far more relaxed. I saw it as a meditation on childhood and its sensitivities, fears, and moments of awe and mystery. (A touch of Joseph Cornell, maybe.) Valise is dominated by the vastness of our planet and the cosmos; Hard Green gives us comic-book imagery of military combat. Soft Ticket was a lyrical remembrance of baseball cards, and the finale, Daylight Moon blended imagery of kid culture and suburban utopias with the soundtrack of Night of the Hunter.

Klahr talked about the quartet as “the best film I’m ever likely to make,” largely because it achieved his aim of a “democracy of subjectivity.” He meant by this the poetic power of the juxtapositions he creates, which invite viewers to connect the material in unpredictable ways. Hollywood films, he remarked, try to get us all to experience the material in a single way, and that’s suitable for a mass audience. But collage films like his have a “signal to noise ratio” that allows viewers to tune in to something, drop out for a few moments, and then tune in again.

For each viewer, the high-information moments will be different, and if a viewer returns to the film, he or she will probably find new images to focus on. This time through the Quartet, I noticed that each of the first three films had a recurring male figure–a sea diver/ astronaut, a soldier, baseball players–until Daylight Moon ends with a man stretched out on a used car. This would seem to be a reverie about a boy’s childhood.

Klahr is a warm, unpretentious speaker and he engaged the audience in a lively dialogue. His work deserves to be more widely known. I can’t imagine watching the Trilogy on DVD; could digital sampling capture the REM effects of the blurring pans? Still, a release on that format would surely expand his circle of admirers.