Over at the Scanners site, Jim Emerson is running a fascinating thread [1]. He invites readers to write about their favorite first shots.

I haven’t joined in, largely because, as with all lists, I have too many favorites and I get tangled up in comparisons. What intrigues me is the idea behind Jim’s proposal.

We all accept that first shots are important. We often analyze films by comparing the beginning to the end, and I routinely ask my students to note the first and last shots of a movie we’ll discuss. But were first shots always as important as we now take them to be? The historian in me thinks that this is a fruitful question.

Consider the films most frequently listed on Sight and Sound magazine’s Ten Best lists [2] from 1952 to 2002. All are classics. But can you recall the first shot of very many of them?

Battleship Potemkin, The Rules of the Game, Citizen Kane, L’Avventura, 8 1/2, The Passion of Joan of Arc, Vertigo, L’Atalante, The Bicycle Thief, The General, Greed, The Magnificent Ambersons, The Searchers, Singin’ in the Rain, Tokyo Story, 2001: A Space Odyssey, and Ugetsu Monogatari.

Now if you’re a keen fan of any of these, you doubtless know the first shots well. But for most of those you’ve seen but not fetishized, I have the hunch that the first shot may not be particularly memorable.

Yet what about the first shot of A Hard Day’s Night or The Conversation or The Player? You’re likely to recall those first shots after a single viewing, and they will stay with you. Nowadays we may even remember the first shots of certain movies that we don’t particularly like.

If you recall only one curtain-raiser on the Sight and Sound list, I suspect it will be that of 2001. As my friend said as we walked out of a Manhattan screening back in 1968, “The sun rises like you’ve never seen it before!” This makes me wonder if there’s a historical breaking point somewhere here.

Was there a moment when directors started to feel that they had to weight the first shot heavily, to treat it as a dense moment that the viewer should savor? The first shot of a film could be as vivid and bristling with implication as the first sentence of a novel. When might directors have begun to think along these lines? Did it start, like so much else in cinema, in the 1960s, and Kubrick entered the first-shot sweepstakes?

Historically, it seems that many first shots serve simply to set up the locale for the first scene. This might be the central function of opening shots inr many classics I just mentioned. No larger implications may hover around the first image.

Sometimes, though, the first shot cunningly plants a story element that seems unimportant at the moment but will become crucial later. My favorite example is the first shot of Harold Lloyd’s wonderful The Kid Brother (1927). (If you haven’t seen this film, go rent it immediately. Better yet, buy the box set, because everything on it is very fine; Lloyd is one of the great, underrated American filmmakers.)

Before I suggest a possible answer to the question of when first shots became attention-getters, here are some speculations about what such shots can do.

*The first shot can present a sort of Ultimate Cause, the basis for everything that follows. In The Birth of a Nation, the first shot shows black slaves brought to America from Africa.

*Sometimes the first shot, however brief, has emblematic significance. The first shot of Battleship Potemkin portrays waves breaking on shore, symbolizing the force of revolutionary consciousness. Eisenstein’s Ivan the Terrible starts with a shot of the tsar’s crown as the coronation is about to start: the whole film will be about the struggle for power. The “No Trespassing” sign at the start of Kane has been widely interpreted as urging us not to judge Kane too simplistically.

*Several of Jim’s contributors have pointed out how thematic elements get set up in an opening shot. Rules of the Game might be another

instance: The long tracking shot that follows a radio cable plunges us into a world in which the naïve pilot is a celebrity, and it sets up a mechanical world (radio broadcast, the plane) that will be echoed in the Marquis’s music boxes later. In Play Time, it’s impossible to know what sort of building we see in the first shot–establishing not only the looming anonymity of modern architecture but the sort of games Tati intends to play with our perception. It also introduces the motif of reflections, an important source of the film’s themes of how old Paris has been spoiled by modern technology.

*Likewise, the First Shot Project contributors have mentioned how the initial image can establish the film’s tone. A good example is the direct-address prologues of The Girl Can’t Help It and Will Success Spoil Rock Hunter? Another is the dissolve from the Paramount logo to the jungle mountaintop in Raiders of the Lost Ark, which signals the sort of tongue-in-cheek homage we’re about to get.

*Sometimes a fairly mundane initial shot becomes salient not in the film that follows but in the context of the director’s other works. In the case of The Passion of Joan of Arc, the book that is opened in the first shot links to all the other books that feature so prominently in Dreyer’s films. Long ago I argued that the book, and the act of writing in it, become important structural principles of how his films tell their stories.

*The first shot can set up a visual-design motif that will get developed in the course of the film. The most famous example is probably the opening door that starts The Searchers. As with Kane‘s “No Trespassing” this motif will serve to bookend the film, recurring not only at intervals but also in the very last shot. Ozu’s Autumn Afternoon opening–surely one of the greatest first shots in cinema–sets up red, white, and silver color elements that will be picked up in the daughter’s wedding dress at the climax. 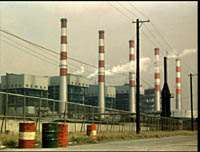 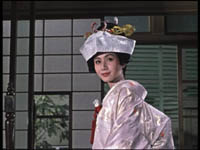 Nowadays, many directors seem to think that they have to start the film with a dazzling long take with complicated camera movements. One example is De Palma’s Bonfire of the Vanities, which he seemed to try to top in Snake Eyes. P. T. Anderson goes all out for virtuoso camera movement at the start of Boogie Nights but then settles on a static long take for Punch-Drunk Love. As in the early sound era, a fancy opening shot can crop up in a more or less ordinary film too, such as the SkyCam- and CGI-driven introduction of the nightclub in The Birdcage. The convention of the flashy first shot is so widespread that The Player‘s opening can satirize it.

Actually, it isn’t that new an idea. Fairly far back in film history, directors seem to have realized that first shots should be freighted with implication. There probably isn’t only one moment when this strategy arises, but I’d suggest looking first at the period when synchronized sound comes in. Most films at the time were pretty static and theatrical in their reliance on dialogue, so a flashy opening shot or sequence could reassert “This is cinema.” The bravura tracking shot was a common way directors chose to draw the viewer into the film’s world, as at the start of Threepenny Opera or of Scarface. Maybe this is a key moment in which filmmakers began to realize that the opening shot of a film should grab or puzzle the viewer and let us reflect a little on the fact that it’s doing so.

Things that seem to us to be current innovations can go pretty far back. There’s a more general implication too. As critics and cinéphiles, we tend to notice particulars–this sequence, this film. But we can also study the history of film forms and styles. We can try to map out the broader principles and patterns, the sources and trends–the items on the menu, we might say–that shape filmmakers’ individual choices.