At a yard sale you find a really nifty yellow ray gun. You had one just like it when you were six. You loved that ray gun. Your hand tingles as you heft this one. It evokes memories of you and your pals playing in the schoolyard.

When you get home, you examine it closely and find that it’s a brand-new replica, made by a company that specializes in retro toys. Suddenly you don’t like it so much.

But why? It’s identical to the ray gun you owned. It’s made from the same plastic and in the same colors. It’s definitely in better condition than an original would be. So why do you feel dissatisfied?

This is the sort of question philosophers of art ponder, though they usually put it more abstractly. Art, we might say, is about appearances–the way something looks (or sounds). People enjoy Leonardo’s Mona Lisa because of the way it looks. If an artist today could make a perfect copy of the Mona Lisa, right down to the individual brush strokes, then that copy should be as enjoyable as the original. Yet a lot of people have the gut feeling that today’s copy somehow can’t offer the same experience as the original.

So aestheticians ask whether there is more to the enjoyment of art than just the appearance of the work. Maybe part of our experience of art involves our sense of the history of art works, an appreciation of where they came from and what they’ve been through. Such a sense isn’t just background information but an integral part of the properly aesthetic experience we have. 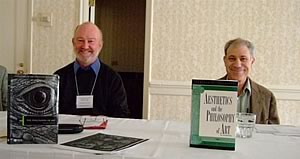 The authors and their books.This was one of the themes that surfaced regularly in my stay at the annual convention of the American Society for Aesthetics. (My first blog on this event is here [1].) There was a tribute to Arthur Danto, who formulated this problem twenty-five years ago in his trailblazing book The Transfiguration of the Commonplace [2]. (He coined the term “indiscernibles” in his discussion of Andy Warhol’s Brillo boxes.) The day after the Danto session, a panel discussion of two new introductory textbooks, Stephen Davies’ Philosophy of Art [3] and Robert Stecker’s Aesthetics and the Philosophy of Art [4], raised issues that intersected with this concern.

Both Davies and Stecker discuss how recent conversations in the field move toward the idea that our experience of a picture or poem or play brings into play assumptions about the work’s historical existence. As I understand it, this is one of the differences between traditional aesthetics, concerned with apprehension of beauty as something immediately apparent, and philosophy of art, which asks about all the factors that go into our understanding and enjoying art.

By the way, this panel was punctuated by hilarious comments throughout. Philosophers definitely have a sense of humor. One of the panelists, Ted Cohen, has even written a philosophical study of jokes [5]. 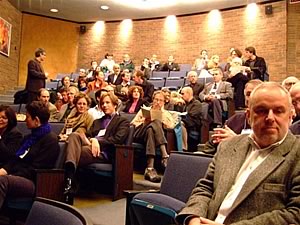 Part of the crowd for Carolyn Korsmeyer’s ASA presidential address. 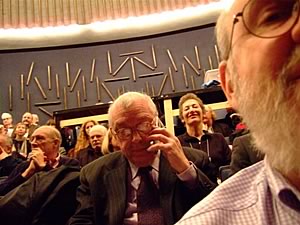 Curtis Carter, Director of the Haggerty Museum, with Professor Stephanie Ross behind. The theme of indiscernibles was central to the fascinating talk by ASA President Carolyn Korsmeyer [6] of SUNY–Buffalo. She argued that genuineness isn’t just a property we add on to artworks that beguile us. Central to the experience of many artworks is the sense of what she called age value, a “palpable contact with the past.” Her examples ranged from historic “reconstructions” of public spaces (e.g., the Erie Canal terminus in Buffalo) to recipes that include non-synthetic ingredients.

How far can we get from the original? Professor Korsmeyer plotted out a continuum, starting with a worn original through stages of repair (using glue from the same period, say, to patch up a cathedral window), restoration, rebuilding, and replication (making a copy in a comparable substance) to end in multiple reproduction (a photo of the Mona Lisa). As we go along the continuum, the age value decreases and what we can appreciate narrows ever more to surface qualities. We move, she suggests, toward “aesthetic deception,” where we risk losing the original altogether. That’s what happened at the yard sale with your ray gun.

The talk set me thinking about how cinephiles appreciate the various versions of films we encounter. Would you rather watch a 1941 35mm print of How Green Was My Valley, a recent 35mm print from the negative, a version taken from the restored negative, or a DVD reproduction? An original, which Kristin and I have seen, can be unbelievably beautiful. Shot on nitrate stock, it has a luster and a fine grain that isn’t captured on safety stock, which came into use after World War II. (Projectionists accustomed to the sharpness of nitrate claimed that safety film was soft and hard to focus.) So there were definite aspects of sheer appearance that contributed to our enjoyment of the film.

But the print of How Green that we saw was a bit worn, with scratches and missing frames. Can we argue that these added age value? Did our knowledge that this was a print that might have been watched by a 1941 audience deepen our sense of the film’s worth? Likewise, even if a sparkling, cleaned-up DVD could adequately capture the look of the nitrate original (it can’t), does its distance from the original take away some of the film’s appeal?

I’m tempted to answer yes, but it’s hard to generalize. Who’d prefer an original, faded-to-pink print of a 1950s Eastmancolor movie to a DVD copy with the colors more or less restored? The pink puts us all too palpably in contact with the past, but what it adds in age value overrides what it takes away in surface qualities.

And sometimes cases are just mixed, I think. For some years I had access to an original Technicolor release print of The Godfather. I loved watching it because the color was never approximated in any other versions I’d seen: the dreadful rereleases, the laserdiscs, even the different DVD versions. Kay’s Republican topcoat lost its ripe light burgundy color in all the video versions.

But at the same time, I was perpetually shocked by how grainy the original Tech print looked. Gordon Willis’s famous enveloping blackness was teeming with grain. (He really pushed the film stock, it’s evident.) The newer prints and the anamorphic DVD versions yield a smoother texture. The film’s harsh graininess is part of age value, but even if the restoration seems guided by contemporary tastes (in this case, our fondness for crisp digital imagery), you could argue that purging the grain enhances the film’s visibility, and hence its sensuous appeal.

The issue is about to crop up again. I learned from the film cadre at ASA that we’re about to get yet another version of Blade Runner, some final director’s cut, in both theatrical and DVD release. Again, I had access to a 35mm print of the original theatrical version, complete with voice-over and enigmatic origami unicorn. That print was monophonic and fading. But the original theatrical version was evidently never released on video or re-released theatrically,so the print has purely documentary value.

There’s more, however. Call it fetishism or nostalgia, but watching that crummy print made me feel I was in contact with Blade Runner as a historical entity, the thing that people (too few) saw back in June 1982. So I think there’s something intuitively right about the philosophers’ idea. Maybe André Bazin anticipated this argument when he argued that when we look at photographs, our knowledge of their origins is an inescapable part of their beauty.

Professor Korsmeyer’s talk took place on the Marquette University campus, and was followed by a reception at the lovely Haggerty Museum [7] there. The museum was hosting a screening (on video) of Hockey Seen, a multimedia dance piece by philosopher Nelson Goodman, and several artists, including the composer then known as John C. Adams. The fact that a philosopher collaborated with several artists on the work seems a good emblem for the goal of the American Society for Aesthetics. These philosophers stay in close touch with the subjects they ponder–art, artists, and audiences.