I’m usually a terrible prophet. But when I first saw Infernal Affairs (2002), I decided that Hong Kong filmmakers had finally made a Hollywood film. Comprehensible exposition, intricate plotting, and well-earned twists have never been strong points of local cinema. I tried to show in Planet Hong Kong that this filmmaking tradition favored episodic construction and virtuoso staging and strictly organized visceral arousal. But in IA Andrew Lau Wai-keung and Alan Mak Siu-fai produced a tit-for-tat crime movie with ingenious intrigue and a density of characterization.

Filled with both top-line stars and powerful character actors, it proved a box-office sensation across Asia, triggering an ambitious prequel/sequel and a strange third installment that is much more like the scattershot Hong Kong movie a lot of us have come to love. Now IA has become the first local film to be remade overseas. Nice as it is to see Media Asia highlighted, the credits of The Departed offer only a stingy mention of the source.

The Departed has been hailed as a big comeback for Scorsese, a filmmaker who has had as many comebacks as Woody Allen, usually to as little effect. The critics are going nuts. “A new American crime classic,” declares Rolling Stone. Newsweek‘s reviewer grants that the Hong Kong original is “terrific” but in the next sentence declares that “Screenwriter William Monahan has done a terrific job transposing the story to ethnically fraught Boston.” Terrific reviewing too: No wonder people turn to the Internet to get less packaged commentary.

Even though IA leaned toward Hollywood, the differences are instructive. (Spoilers in this and the next paragraph.) Structurally, The Departed swerves from the original in a way that softens its impact. In IA, the final twist leaves the Triad mole in the police alive and victorious. In a local context, this ending gains a powerfully bleak effect. A Hong Kong movie hero needn’t survive the final confrontation (he even gains in stature from dying grandly), but the villain is seldom left standing.

In most respects Monahan’s script adheres to the original beat by beat, or rather bleep by cellphone bleep. But the American ending is oddly more faithful to the Hong Kong mainstream. Now our hero doesn’t die in vain. The bad dude is paid back, thanks to a contrived in-case-of-my-death message sent to the shrink-girlfriend whom the two protagonists share. Ironically, Monahan’s ending is akin to the obligatory punishment on display in the version of Infernal Affairs reshot to placate Mainland China’s censors. Maybe American and Chinese tastes align more than we think.

Most reviews have warmly welcomed the return of the tone of GoodFellas and Mean Streets, but I’m more hesitant. We’ve seen a lot of this before. Again guys cuss a lot and make sexist jokes. (The first ten minutes have three references to menstruation, none complimentary.) Again confrontations and whackings are underscored by boomer rock tunes. And again the camera swaggers. Scorsese’s visual bravado was always a bit overhyped; did he bequeath us the idea that every scene had to have “energy”? This time out the tricks seem to me forced; I didn’t think we needed so many cut-off pans and swiveling camera moves.

By asking me to watch those wild Asian movies, I think Marty was pushing me to try something different. I tried to do that, but after a couple of days on the shoot I realized that although the styles of those movies were great for the particular stories they were telling, we were doing an American movie with American stars. In the end, I had to pull back a bit from those wilder styles; I couldn’t go that far with this movie (p. 38).

Maybe that’s the problem. Wild films don’t get nominated for Academy Awards. True, wild performances do, but even satanic Jack probably wouldn’t eat a big live squid (as does the hero of Oldboy, right). Long ago Taxi Driver inspired Hong Kong filmmakers to push harder, but instead of replying in kind, Scorsese/Ballhouse leave it to B entertainments like Crank, Torque, Running Scared, and Domino to nudge Hollywood toward Asian extroversion.

Even more eagerly than The Aviator, The Departed embraces what I’ve called “intensified continuity.” (See Film Art Chapter 6 and The Way Hollywood Tells It, Part 2 [2]) In this style, conversation scenes feature very little movement of actors around the set. Performers sit or stand and deliver their lines in isolated shots (singles) or over-the-shoulder (OTS) setups. The visual stasis is compensated for by lots of cutting, camera movements, and tight close-ups.

The Departed has calmed Scorsese’s urge to track a bit, but that’s balanced by its over 3200 cuts. The result is an average shot length (ASL) of about 2.7 seconds. Not unusual for an action picture nowadays, but consider where Scorsese started by conning these ASLs:

Like his contemporaries, Scorsese has succumbed to the fast-cut, hyper-close style that has made our movies so pictorially routine, however well-suited they may be for display on TV monitors and computer screens and iPods. In 1990 he seems to have realized that he needed to pick up the pace. Of GoodFellas (ASL 6.7 seconds) he remarked: “I guess the main thing that’s happened in the past ten years is that the scenes [shots] have to be quicker and shorter. [GoodFellas] is sort of my version of MTV. . . but even that’s old-fashioned” (The Way Hollywood Tells It, p. 152). (For more on measuring ASLs, see the Cinemetrics site here [3].)

Speaking of editing: It’s blasphemy, but I’ve been long convinced that Scorsese’s films aren’t particularly well-edited. Look at any conversation scene, particularly the OTS passages, and you’ll see blatant mismatches of position, eyeline, and gesture. Spoons, hands, and cigarettes jump around spasmodically. In The Departed, Alec Baldwin somehow loses his beer can in a reverse shot, and in the swanky restaurant, it’s hard to determine if there are one or two of those towering chocolate desserts on the table. 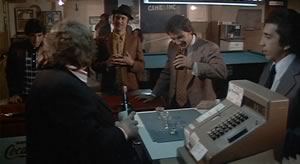 This may seem picky, but craft competence is not for nothing. Current reliance on tightly framed faces tends to sacrifice any sense of the specifics of a place. In most scenes, actors are so overcloseupped that little space is left for geography, even the mundane layout of a police station. Choppy cutting also subtly jars our sense of a smooth performance. Why can’t our directors sustain a fixed two-shot of the principals and let the actors carry the scene–not just with the lines they say but with the way they hold their bodies and move their hands and employ props? Scorsese, though always a heavy shot/reverse-shot user, held full shots to greater effect in earlier movies.

I’d love to join the applause that welcomes Scorsese back, but for these and other reasons I have to sit on my hands. For me, the inventiveness of the Asian tradition still reigns supreme in the crime genre. I grant that Infernal Affairs accepts the energy-aesthetic, with its swooping camera moves and its 3.2 second ASL. But the camera gives its actors room to breathe, and it spares some time to define a scene’s locale.

On a higher level of accomplishment stand Johnnie To’s The Mission, PTU, A Hero Never Dies, and half a dozen other films–very likely including the most recent, Exiled–along with the dazzling works of Kitano Takeshi and several other Asian directors. These are truly terrific.

P.S. 20 Oct 2006: This post on Scorsese’s Departed started a passionate and pretty discerning discussion over on Jim Emerson’s Scanners blog. You can read the thread, including my horrendously long comment, here [4].