A late night Thursday, and a snoozy day of traveling on Friday, kept me from posting ASAP. And now on Saturday morning—I can’t get on to my own blogsite! Apparently others can. So while our web czarina Meg fixes things, I try to wrap things up on my visit to the Vancouver International Film Festival.

Le Petit Lieutenant: A policeman’s lot is never a happy one. From Ed McBain’s 87th Precinct to Ian Rankin’s Rebus series, modern crime novels give an emotional resonance to police procedure by showing the psychological costs of being exposed to cruelty, chicanery, and death. American cop movies have gradually let more of this quality come through (Prince of the City, Heat, Dark Blue), and of course TV, from Hill Street Blues to The Wire, has turned the police procedural into urban melodrama. But the French got here first. For decades, their cop movies have been world-weary psychological dramas shot through with bitter realism. Think of Corneau’s Police Python 357, Pialat’s Police, Tavernier’s L.627, or any of Melville’s policiers.

Le Petit Lieutenant, which I saw on my last day, falls into that sturdy tradition. The premise—a string of attempted murders of bums and passersby—is played out with the usual clue-by-clue plotting, but we also witness the strained lives cops lead. Our two protagonists are the overeager recruit Antoine (Jalil Lespert) and his recovering alcoholic supervisor Carolina (Nathalie Baye in an utterly deglamorized performance). Xavier Beauvoi’s narration shuttles skillfully between their points of view, leading to a good deal of sympathy and suspense and a grim but plausible climax. One of several nice touches: the cops keep movie posters over their desks, and if I’m not mistaken, in some cases the posters serve as hints to the cops’ personalities. The ending leaves you as bereft of certainty as the protagonist.

Do Over (Taiwan): For a finale, I caught this extraordinarily ambitious movie by the twenty-eight-year-old Cheng Yu-chieh. Shot in anamorphic widescreen (very rare in Taiwan over the last twenty years), it belongs to the trend I’ve called “network narratives.” Across New Year’s Eve and New Year’s Day, the lives of several people converge and diverge in the fashion of Short Cuts and Magnolia. Each character’s strand evokes a different genre: gangster movie, romantic drama, twentysomething “relationship” comedy, and the movie about moviemaking. Each strand is also set off by a distinctive photographic style, from misty blue to grainy, blown-out noir.

A network plot often exhibits an interesting mix of realism (in life, strangers’ lives do become tangled) and artifice (chaptering, repeated scenes, and other overt narrational devices). The artifice becomes flagrant at the film’s end, when Do Over‘s title gets literalized and the plot lines are revised to yield alternative endings. The cleverness doesn’t get the upper hand, however, and this remarkable debut leaves you both satisfied and looking forward to Cheng’s next film.

After two trips to Vancouver’s festival, I have yet to go to any tourist destination. I’ve lived within a few square blocks, dashing among hotel, DVD stores, and the Granville Multiplex, with forays to the Pacific Cinematheque and the Vancity Theatre and sushi restaurants and crepe cafes. I’ve lived a film-wonk holiday across eight days and dozens of movies. Thanks to Alan Franey, the Festival Director, for inviting me and extending me so much courtesy. I’m grateful to all the help of his colleagues PoChu Au-yeung, Mark Peranson, Eunhee Cha, Steve Martindale, and Jack Vermee. I wish we’d had more time to talk! Over the last two visits, I’ve made new friends from all over the world, and I’ve enjoyed just sitting among exuberant audiences.

Tony Rayns has been programming Asian films at Vancouver since 1988, and I have to note the melancholy news that he’s stepping down as coordinator of the Dragons and Tigers competition. I’m unhappy as well that I can’t be at Vancouver tonight (Saturday) to see the results of the competition and participate in what will surely be a string of tributes to Tony. So here’s a weak substitute—my own appreciation online. 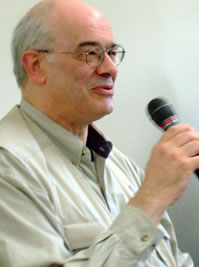 In Tony Rayns deep expertise is joined to an unmatched passion and curiosity. His Vancouver programming was crucial in introducing directors like Kitano and Hou to West. He has also made films happen: Without the acclaim of Vancouver audiences and the prestige of the Dragons and Tigers prize, how many distributors would have backed later work by young directors over the last twenty years?Most critics prefer to stroll into screenings to watch films that miraculously appear, thanks to the work of dozens laboring behind the scenes. From the start Tony got his hands dirty. Apart from writing discerning and literate film criticism, he worked for film festivals, wrote presskits and program notes, translated subtitles, and pushed for offbeat films to be available on video and cable. Above all, he programmed films, backing his tastes with an expanding network of allies in the film industry. He helped create a climate of opinion that welcomed the burst of creative accomplishment that Asian film has offered over the last three decades.

Tony’s been a friend since the mid-1970s, and his influence on my tastes and thinking has been immense. I wouldn’t know a lot of what I know without his tireless proselytizing for once-obscure films and filmmakers. He’s sensitive to all a film’s dimensions—its social and artistic implications, its relation to the director’s personality and life experience. A late-night conversation with him, preferably over Asian food, is like being in the liveliest seminar you ever took.

Many of Tony’s contemporaries—I know plenty—have given up on contemporary cinema. Who can blame them, after a trip to a multiplex? Too often, cinema seems over. But this has only made Tony dig deeper, watch more widely, and remind us that this art form is still frisky, unpredictable, and occasionally rapturous. The French have a word for it: animateur, the person who sends a jolt of energy into a culture. Like André Bazin and Henri Langlois, Tony is one of the animateurs of world cinema, and everyone who loves film is in his debt.